Forget cronuts and faddish flapjacks. Waffles have broken beyond breakfast gridlock, and their surging popularity proves that it’s hip to serve squares at any daypart.
Culinary Ideas 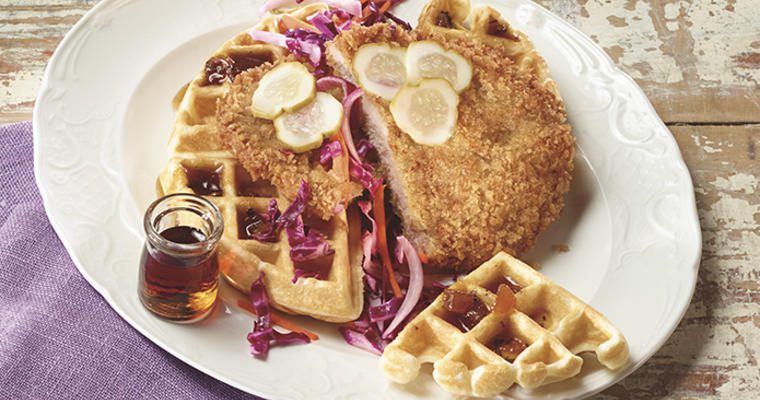 In many ways, waffles are the little black dress of the menu. Dress them up or down. Go healthy with whole-grain batters and fresh fruit toppings. Or go healthier and serve sugar-free/gluten-free “skinny waffles.”

However you roll out waffles, follow basic item-development principles.

“Make sure it fits with the theme and brand of your restaurant,” Ludwig advises. “Build your recipe development around ingredients you have in-house. If one of your specialties is pulled pork, use that for a waffle special. Be consistent with your menu to avoid expanding inventory and increasing food costs.”

So be creative. The waffle’s culinary heritage may hail from the land of the Walloons, but it’s now as American as apple pie and as global as garammasala—both of which have found their way into waffles. Create signature batters and go seasonal—e.g., caramelapple in fall and gingerbread waffles in winter. Use a variety of flours, grains, and seeds—e.g., whole wheat, rye, buckwheat, rice, grits, and quinoa.

Just remember to preserve waffles’ distinctive mouthfeel, so don’t overload them; serve syrup on the side.

“Part of the enjoyment of waffles comes from the crispiness.” Ludwig says.

Mintel market research reported in 2014 that breakfast menus were growth areas on fast-food and casual-dining menus.

Taco Bell launched a waffle taco stuffed with eggs, sausage, or bacon as a way to gain traction in the breakfast daypart. And White Castle introduced three waffle breakfast sandwiches—cheese, bacon, and egg; cheese, sausage, and egg; and one with a fried-chicken patty—all prepared with waffles actually imported from Belgium.

The popularity of Belgian waffles with strawberries and whipped cream endures on breakfast and dessert menus. Newly emerging is the Liege waffle,topped with coarse Belgian pearl sugar.

The ultimate savory waffle star is chicken and waffles. This Southern staple has starred on L.A. menus for years and is fast coming to menus everywhere.

“A signature version of savory chicken and waffles can be a great opportunity on a variety of menus,” Ludwig advises.

The Pullman Kitchen in New York, for example, menus a Chicken and Waffle entrée featuring buttermilk fried chicken on a cornbread waffle, with pepper Jack cheese and Vermont maple syrup. But why stop at chicken? Examples:

“If you’ve never served a waffle, you’ll spend a pretty penny on a good-quality waffle iron,” Ludwig says.“However, you’re selling cooked batter with a lot of air. There’s great margin potential, so the payback is huge.”