Tips on How to Serve Food for Picky Eaters 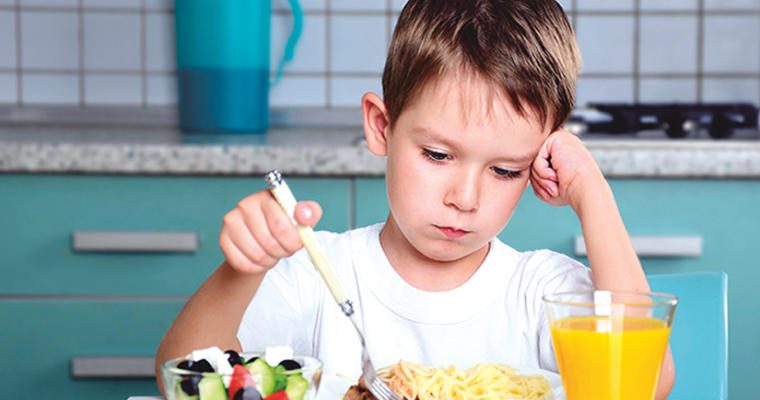 Snooze alarm once. Snooze alarm twice. The teen who has slept in right up to the edge of the being late for the school bus thumps downstairs looking to grab a bite of breakfast before bolting out the door. Does he choose a banana or an orange from the fruit bowl on the counter, or does he reach inside the pantry and grab a toaster pastry or an energy bar from the shelf? For most students, the food in the pantry wins.

“Kids often take the easy route,” says Jan Faulman, Foodservice Director at Alpena Public Schools and Alcona Community Schools in Michigan. “It’s a lot easier to open a package of fruit snacks than it is to peel an orange.” But are these youthful eating choices a matter of nature or nurture? Do kids naturally acquire picky palates, or do they learn to be choosy?

A recent University of Illinois study involving parents of 170 children ages 2 to 4 found more than half of the kids exhibited picky eating behaviors that fit into one of four categories:

K-12 foodservice directors acknowledge that all four types of picky eaters are common in all grades. This suggests eating habits start long before a child eats his first school lunch.

“We, as a society, have allowed kids to be menu-makers,” Faulman says. “Kids choose the meal and the entire family eats it because no parent wants the guilt of having a child going hungry.”

School cafeterias must walk a fine line—serving the picky eaters while remaining in compliance with nutrition requirements. With this in mind, those in charge of school kitchens have some food for thought.

At Gaylord Public Schools in central Michigan, Foodservice Director Sandy Matelski says a salad bar is one way to let students choose what to put on their lunch tray. When students can choose the foods they want, you don’t have to worry about matching individual tastes. Plus, there is less waste.

Taco bars offer a similar approach, with many options and combinations available to satisfy choosy eaters.

“When Taco Bell chalupas became popular, we offered pre-assembled chalupas on the line, and kids didn’t like it,” Matelski said. “But, if we offer a soft taco shell and allow students to build their own chalupas, it’s a huge hit.

Faulman says Alpena students are offered a wide range of entrées daily, even at the elementary level, where there are four or five entrées, plus fresh or canned fruits and vegetables to increase variety.

“In addition to the half-cup of orange slices we’re required to offer as a fruit, we sometimes slip in a bit of peaches or some other fruit to test student preferences,” Faulman says. “And we also have boxes of raisins at the end of the line for students who don’t choose a fruit as they go through.”

This is another factor that has paid off as Matelski’s district adjusts to school food regulations. She says students were reluctant to even try some of the new foods that were first offered, so her staff worked to make meals more color-friendly.

“Students didn’t like the color of black beans served as a side, so we mixed them with other vegetables,” Matelski said. “They now love the Baja Black Bean Salad salsa we have created.”

Inviting students to the table starts long before lunch hour. CheyAnne Fant, Director of Nutrition Services at Barren County Schools in Kentucky, sits down with students as young as preschool age for taste tests.

“It’s amazing what happens when one student sees another one touching, holding, and trying broccoli,” says Fant, who serves about 571,000 lunches and 289,000 breakfasts a year at 11 cafeterias. “Interaction leads to tasting, and tasting breaks down barriers.”

Fant says she also invites parents to join the taste-testing, and suggests schools conduct an invite-parents-to lunch (or breakfast) day.

“We had more than 2,000 ratings in the first semester—most foods received 4 or 5 stars (the highest rating),” Fant says. “Students also suggested grab-and-go boxed lunches that have become very popular.”

At Gaylord Schools, Matelski takes a more direct approach, working with Gordon Food Service® and its suppliers to conduct a mini food show. Students get to sample new foods as well as taste foods already being served.

“We bring in foods we think the kids will like, and we remind students of their options, reintroducing things they may have overlooked or forgotten about,” she says. “Kids will be brutally honest with what they like and don’t like.”

Faulman says Alpena puts a number of family-favorite casserole foods on the menu because that’s what parents say students eat at home. She stresses the importance of listening to parent requests and paying attention to the foodservice staffers who have children or nieces and nephews who eat the school lunches.

Unfortunately, some favorite at-home meals don’t fit school lunch requirements. At Gaylord Schools, Matelski says she and her staff have “pounded down” a lot of their recipes to make sure they can keep student favorites and meet food guidelines.

“Mac and cheese has always been a favorite, so we had to tweak the recipe using different cheeses to cut down on the sodium,” she says. “It took a lot of trial and error until we found something that tasted just right.”

Because schools are a learning environment, it’s the perfect place to teach healthy eating habits that can be modeled on the lunch menu and reinforced at home.

Many happy memories center around mealtimes, so students should enjoy the experience. This includes having the occasional special meal as a reward.

At Barren County Schools, Fant says students look forward to “Create Your Own Pizza Day,” where toppings include everything from the traditional cheese and ground meat to pineapple and Canadian bacon.

Faulman says seniors at Alcona Schools get a week at the end of the year where they choose the menu. They often pick favorites from the regular offerings, like pizza and Bosco sticks, but they’ve also enjoyed setting up a sundae bar for dessert.

At Gaylord, Matelski says fun is a daily thing. That’s why she tries to mimic a lot of popular foods. If students like something they’ve eaten at a restaurant, she says she’ll try to make it at the school kitchen if it fits within the budget and nutrition guidelines.

“We have made a version of the Big Mac, and the students love it,” Matelski says. “And one of our kitchen staff members came up with a breakfast crunch wrap because she heard students talking about the ones they liked so much at Taco Bell.”

When it comes to feeding picky eaters, there are plenty of options. Take it from Barren County’s Fant: “A little planning goes a long way.”