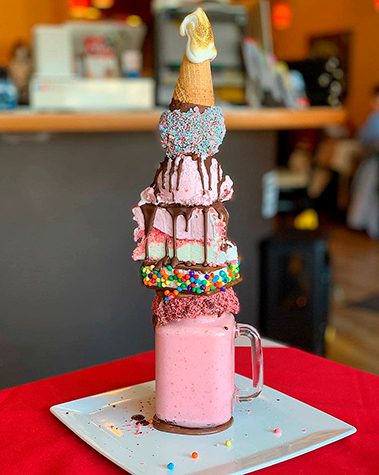 Never underestimate the power of publicity. Garrido’s Bistro has been in business for just a few years, but the suburban Detroit family-run restaurant is known far and wide thanks to social media and the television spotlight.

It helps to have a menu with photo-worthy global food favorites and inspired beverages that turn sweets into eye candy. Even so, it may not have succeeded without a desire to feed people foods that are part of the Garrido family’s fabric.

The restaurant’s story began in 2014, when chefs Vanessa Gonzalez, Christopher Garrido (her husband), and David Garrido (her father-in-law) came from Venezuela to Grosse Pointe Woods, Michigan.

“We wanted to introduce ourselves by showing people what we love to eat,” Vanessa says.

Her parents are from Spain, Christopher has family roots tracing to Ukraine and Germany, and they both grew up in Venezuela. David Garrido started the High Training Educational Institute, a culinary school in Caracas—the Venezuelan capital—more than 20 years ago.

Between their backgrounds and their training, they had a global palette of food ideas. They began by hosting theme dinners (Spanish, Peruvian, Brazilian) in their 36-seat restaurant. Guests always fell in love with at least one dish, Vanessa recalls. “They asked for it to be put on the menu, and then they would come back looking for it.”

Then one night the restaurant received an after-hours call from a television network creating a show about restaurants combining Latin American and American cuisines. A network staffer discovered Garrido’s thanks to social media.

Soon after, their arepas—a ground maize dough used in place of a bun for sandwiches, burgers, chicken, seafood and vegetables—were featured on The Food Network’s “Ginormous Foods” program. That was followed up by public television’s “Under the Radar Michigan” program and then a featured spot on The Travel Channel’s “Food Paradise” program.

“All those visits by the television programs were great surprises and true blessings … we couldn’t be more grateful to the people who work in the media in this country,” Vanessa says. “They found us, we certainly don’t have the resources to look for them.”

They also come for the “Barista Creations,” the enormous hot chocolate drinks and milkshakes that owe their success to—what else?—social media.

The eye-catching beverages began as a way to let people know about the Garrido’s old-fashioned hot chocolate. “We were going through all of the trouble of making hot chocolate on the stove and only selling a few each week.”

Christopher decided their hot chocolate looked just like everyone else’s, so he decided to make it look different, melting marshmallows on the rim of the mug and creating a tower of whipped cream with candy sprinkles and a waffle on top. He posted the picture on social media, and within 45 minutes a customer with two girls came in and ordered the drink, which became known as “Extreme Hot Chocolate.”

That was in winter, when hot chocolate is a Michigan comfort food. By spring, Garrido’s was offering “Over the Top Shakes,” ice cream treats that kept the creativity flowing. There are shakes topped with doughnuts, lava cakes, giant Oreo ice cream sandwiches and an ice cream cone on top, making it hard to decide where to dig in.

The treats have been a smashing success, selling between 60 and 80 on any given Saturday or Sunday, a little less during the week. Because of their size and cost (as much as $18 depending on ingredients), the shakes are usually a treat shared by two or more people.

“We have a lot of customers stop in for the food, and when they see one of those shakes come out of the kitchen, they ask about it,” Vanessa says. “We want people to be surprised, have fun and tell other people about it.”

So far, that has been a big part of Garrido’s recipe for success.

Name: Vanessa Gonzalez
Education: High Training Educational Institute (Caracas, Venezuela)
Signature dish: Arepas sandwiches
Major culinary influences: The women in my family. My mom and sister are amazing cooks.
Favorite food town: New York City
Favorite cuisine: Southern Spanish, Southern Italian, Greek and Mediterranean. I love the use of lemon and fresh veggies, and meats that are grilled or seared.
Favorite ingredient: I love how cilantro and lime work together.
Favorite kitchen tool or gadget: 1. My knife. 2. My hands. 3. Rubber spatula.
Home screen image: My dog, a husky
Who will play you in the movie: Charlize Theron
Philosophy on life, food: “Whatever you eat should not only hit the spot, but also your soul.”