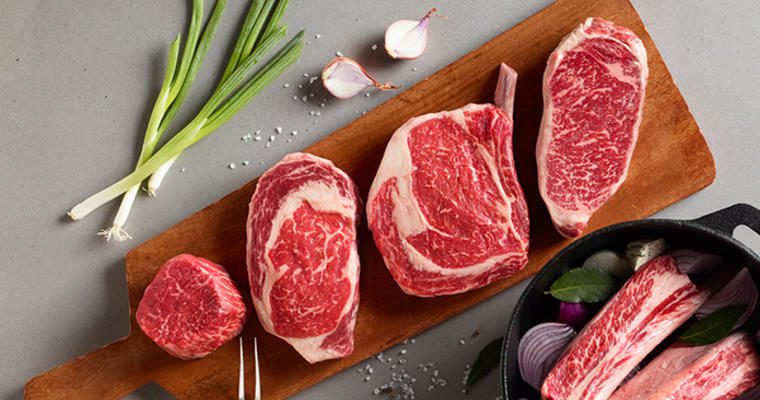 If anyone asks “Where’s the beef?” on the I-75 corridor in Southern Kentucky, look no further than Old Town Grill. Halperns’ Angus Beef is turning heads for people who turn off the highway in London, a burg of about 8,000 people on the edge of the Daniel Boone National Forest.

The operation’s recent conversion to Halperns’ Angus Beef at all four of its locations—London, Corbin and Somerset in Kentucky, and Tazewell in northern Tennessee—has made Old Town Grill’s steak menu the talk of each town’s restaurant selection. And they don’t consider themselves a steakhouse.

“Some national chains are coming to London, and they sell a lot of steaks,” says Old Town Grill co-owner Mike Caffery. “They are going to tell you they have good steaks, but they don’t have GREAT steaks.”

His plan is to out-steak the steakhouses using the consistent marbling, flavor and texture of perfectly aged Halperns’ Angus Beef. “I like the fact that no matter what steaks we buy, they are aged a minimum of 21 days. Every time I pull a steak out of the cooler and put it on the grill, I know it’s going to come out just right.”

That’s important, especially when you are trying to maintain quality across four kitchens, each with varying degrees of staffing skills. “We made a decision to buy the best product we could,” Caffery says “That way we could count on even our most inexperienced cook preparing nothing less than a superior steak.”

Quality pays off in flavor

Caffery’s restaurants used other steaks in the past, but he knew of Halperns’ reputation for quality from a previous job. When Gordon Food Service began selling Halperns’ Angus Beef, he knew it was time to climb on board.

Halperns’ Business Development Specialist Jared King explained the quality proposition. Instead of buying USDA Select grade, Old Town Grill was shown how using Halperns’ Angus Beef, which is upper two-thirds Choice and higher, was a winner. “Anyone can sell select steaks, but with Halperns’ he learned he would be the only one in the area selling this kind of quality,” King says. “When you break steaks down to the portion cost, the cents per ounce is minimal, but the difference in flavor is tremendous.”

Now, Old Town Grill has customers coming in and having the best steak experience they’ve ever had in town, something you cannot put a price on. “Prime rib is our biggest success story,” Caffery notes. “Sales are up 20 percent since we went to the Angus program.”

His servers notice the difference, too, and have been selling the steaks with confidence. This means higher check averages and better tips. “They’re tickled to death.”

Old Town Grill has now crafted a story around it’s steaks, explaining that the consistency comes from buying beef that comes from a single source in Greeley, Colorado. “The steaks we used to get were either Select or Choice and came from Charlotte (North Carolina) or Birmingham (Alabama). With Halperns’, we’re getting the same cuts of meat, but they are just better quality—there’s no other way to describe it when it comes to the tenderness of the steaks.”

Each Old Town Grill location takes pride in making everything fresh. Caffery says that’s why Halperns’ Angus Beef is such a good fit. He estimates his red meat—steaks, ribs, tips and burgers—account for 30 percent of his sales, so he can’t afford to sacrifice quality.

At the same time steak sales are up, steak sauce usage is down, telling Caffery that customers recognize they are getting a product that tastes great without any embellishment. “We do the same thing the other places are doing,” Caffery says. “We put a steak on the char-grill and use Montreal seasoning … it doesn’t get any more simple than that. The difference is Halperns’.’”