Brewery Vivant focuses on local while mixing in a touch of French-Belgian country cuisine.
Culinary Ideas 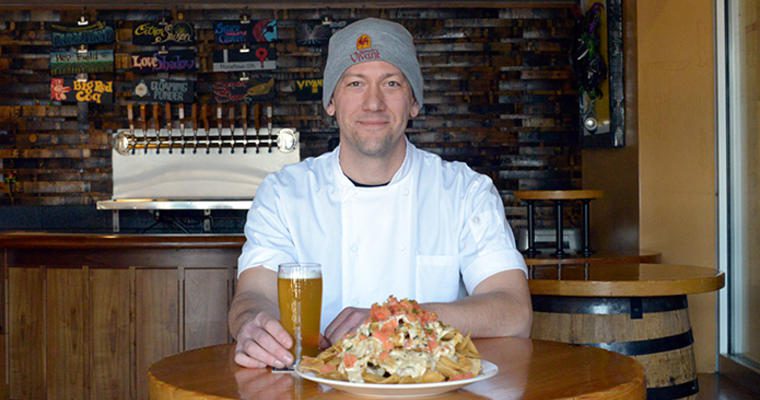 In the early days of Brewery Vivant, the brewpub was preparing for a party and needed a memorable munchie. Since the Grand Rapids, Michigan brewpub specialized in craft beers inspired by the French-speaking Belgian countryside, the chef created a menu item to match. The establishment’s now-famous Duck Confit Nachos took flight.

Although listed on the menu as an appetizer, Duck Confit Nachos is a giant plate of food: a heaping pile of nacho chips, duck cracklins, Brie cream sauce, tomato concasse, caramelized onions and lemon zest.

“They tried it out, and it ran as a special the entire weekend,” says Chris VanderMeer, Brewery Vivant’s Executive Chef. “It was so popular that the owners said, ‘You need to keep that on the menu,’ and it’s been there ever since.”

The Duck Confit Nachos are so original and inspired that Thrillist counts them among “The 21 Best Nachos in America.” The list is filled with variations on traditional nacho ingredients (jalapenos, smoky meats, refried beans, etc.), so Vivant’s original French-Mex twist stands out.

Although VanderMeer can’t take credit for creating the dish, he recognizes how well it fits with brewpub’s signature Farmhand draft beer. It’s a combo right at home in a dining area with exposed timber beams and solid wood pub tables in what was once a funeral chapel (Vivant’s website lists its hours under “Visitation.”).

He joined Vivant eight years ago, just a few months after the restaurant’s debut, and credits Gordon Food Service for reliably supplying ingredients for the nachos and beyond. “We get the duck from you, the cream, the Brie… a lot of fresh, local, quality ingredients,” VanderMeer says. “I feel blessed to have a great working relationship with Gordon Food Service—I know you’re always going to be out there trying to find me something to get me where I need to be.”

He points to a noticeable increase in effort when it comes to sourcing local products, a key part of Vivant’s sustainability mission. This includes goals of 75 percent of spending within Michigan and sourcing half of its food products within Michigan.

Familiar foods, with a twist

“We try to push the envelope with familiar foods that have a little twist,” he says. “We do a seasonal sausage, and right now we’re featuring a bison sausage. We’ve also featured elk and venison on our charcuterie board.”

He praises Vivant’s owner Jason and Kris Spaulding, for giving him the freedom to experiment and watch for food trends.

Recipe development doesn’t come from one mind. “I encourage every cook I bring in here, ‘I don’t know everything; if I did, this wouldn’t be fun anymore,’ so we’re always learning from each other,” VanderMeer says, noting that it’s good to know Gordon Food Service understands their mindset and what they’re trying to do.