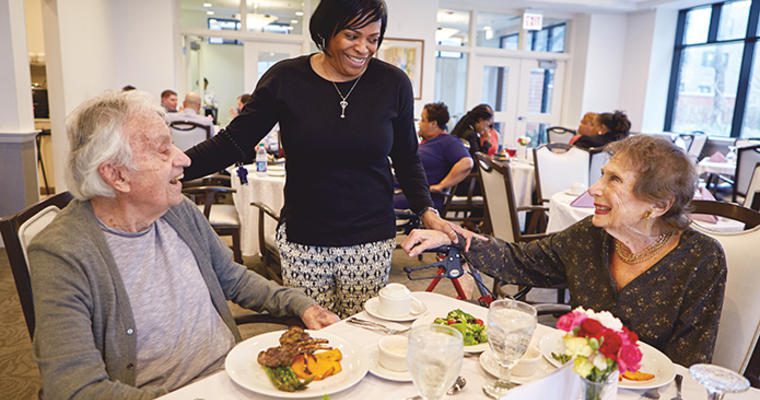 Quick wins. They look great when you see the results. But the truth is, quick wins are just that—fast, easy and often not enduring. Instead, what you’re probably after is a small change or two (or three) that add up to bigger successes.

It’s never as simple as the before and after pictures of people in a weight-loss program. It starts with defining the problem, establishing goals, having the discipline to work hard and exhibiting the patience to see small success pay dividends.

Gordon Food Service Sales Representatives and business teams work closely with customers to achieve small success stories. We’re sharing four of them here, and we invite you to consider whether these could work for your business.

Start with resident satisfaction in mind

Solving a challenge takes talking about it first. For Becca Cramer, that meant business planning sessions with leadership of an organization that has multiple senior living communities across northern and central Ohio.

Cramer, a Gordon Food Service Healthcare Account Representative in Westerville, Ohio, sat with key corporate decision makers and learned resident satisfaction scores are the corporation’s top priority. “We know foodservice is a big factor in those scores, so we conducted an audit at the communities with the lowest scores.”

After talking with the foodservice team and residents, Becca’s team suggested several ways to meet residents’ expectations and manage costs in the kitchen. One element they stressed was the WOW! Factor and its focus on customer service.

“It pays to understand cultural, regional and generational differences,” she points out. “Whether it’s employee appearance, the way seniors are greeted or even the way the table is set, we have to respect that we’re working in someone’s home.”

Talking and listening, Cramer notes, are vital to customer service and consistency. They can be overlooked, however, when there’s staff turnover or an influx of people working their first jobs. The benefits of patient satisfaction may not show up immediately on the bottom line, she says, but improved scores will build business.

Get inventory under control

At Baptist Health System in the Houston area, the corporate chef overseeing six hospitals thought food spending was too high. Orders were being placed by a procurement person or chef at each location, causing inventory tracking challenges.

“We identified Inventory Manager, available exclusively through Gordon Food Service, as a good tool for them,” says Gordon Food Service Sales Representative Jennifer Rivet. “It forced them to take a look at what was on their shelves every week instead of ordering more when extra product was already in hand.”

She worked to organize ordering at each location so requests could be called in on a regular deadline to the Tenet Health corporate chef. By establishing par levels—a minimum quantity that’s always in stock—more product wasn’t ordered until needed. This saved stockroom space, waste and the cost of food purchases.

Across the six hospitals, inventory management and other reductions in catering and retail resulted in $600,000 in savings. “While we still have a lot of work to be done, Inventory Manager has helped us identify areas of opportunity and given our chefs and directors a tool to better manage costs,” says David Harris, Lead Food and Nutrition Services Director for Baptist Health System.

At a Nashville, Tennessee-based division of Health Corporation of America (HCA), big savings were achieved in an area that’s often overlooked in every hospital—floor stock.

By taking a closer look at the beverages, soups, snacks, cereals and other types of between-meal foods for patients, Gordon Food Service National Account Manager John Claytor says it led to process changes that reduced the number of items on each floor and streamlined the work for HCA.

Jeff Barwick, Vice President for Support Services at HCA’s Tri-Star Division, said a review showed about 120 SKUs for snacks and beverages across the division. A comparison showed about two dozen SKUs in common. “The rest were just preferences that grew over time with no strategic purpose.”

He worked with nurses, dietitians and foodservice directors to define a common list of floor-stock items and a policy for how they were to be distributed. This brought consistent service and prevented run-outs that in the past meant disrupting patient care when a floor nurse called for supplies and then affected the cafeteria by having a kitchen worker leave to deliver floor stock.

“It wasn’t driven as a supply cost reduction. It was more about keeping our people serving patients and serving guests in the cafeteria.”

The cost reduction, however, was a substantial 30 percent. And, Barwick points out, further savings include labor and time at the loading dock, less inventory tracking and reduced spoilage.

At Reid Health in Richmond, Indiana, administrators were looking for ways to save money. The first instinct, according to Gordon Food Service Healthcare Account Representative Wes Woodcock, was to try some fairly common practices, such as substituting brands. After evaluating about 100 items, Woodcock and his Ohio Valley team found ways to switch about 20-30 items and save $15,000 to $20,000 over the year.

But he and Kris Ankeny, MS, RD, CD, Reid’s Director of Food and Nutrition Services, knew there were other possibilities. One was controlling food waste, a topic that came to light when the 207-bed hospital began donating usable food overproduction to a charity. “Our waste was great for the soup kitchen, but not our food production,” Ankeny says.

Reid tried to handle the issue internally at first, Woodcock says, but eventually decided to try LeanPath, a company that provides scales and cameras to measure waste, as well as software to track and pinpoint potential savings. Although LeanPath’s cost made Reid reluctant at first, the payoff has been more than $25,000 in food waste savings for the hospital that serves 3,600 meals a day to patients, staff and guests.

“Our goal was to get down to $500 of waste per week,” Ankeny says. “We started at $1,400.” The tracking has led to changes throughout the food-production process. Fewer soup and cookie selections are offered at the hospital café. The kitchen now uses 2-pound bags of frozen vegetables instead of steaming 25-pound bulk boxes. Value-added products—pre-cooked, seasoned, marinated or breaded foods—have benefitted labor, production time and speed of service.

None of this could have been accomplished, Ankeny says, without total staff buy-in. One fun way to incentivize workers was simply to give a Zero candy bar (for zero waste) to the employee most successful at cutting waste.

Zero. A small number that added up to something big.