Bacon and its pork cousins are showing up on all parts of the menu in many inventive ways.
Culinary Ideas 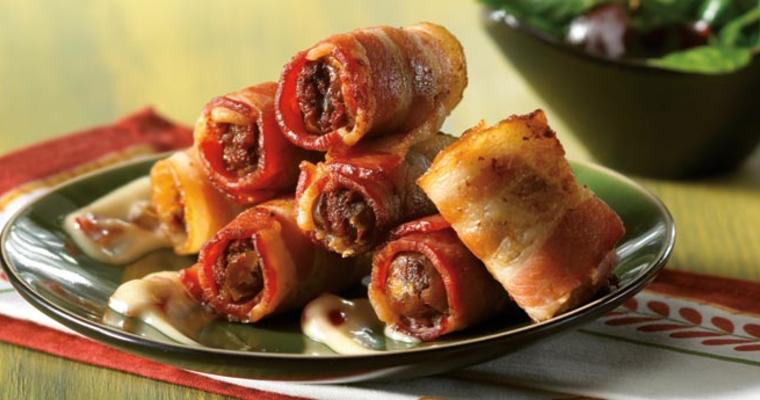 Bacon has broken the bounds of breakfast and the BLT.

From beer-battered bacon snacks to bacon-infused cocktails to bacon burger meatloaf and bacon sundaes, bacon is on everything, in everything, and is everywhere. And, with bacon-of-the-month clubs, bacon festivals, and bacon food trucks, Americans clearly have gone hog-wild for the underbelly of the pig.

For operators, bacon is the utility infielder of ingredients. Because it complements practically everything—savory or sweet—you can use bacon to layer flavor in novel, and sometimes edgy ways.

Makin’ the Most of Bacon Trends

Creative restaurant operators are using bacon in craveable creations that captivate and satisfy customers. Here are a few examples:

Snacks. Beer-battered bacon and bacon popcorn (popcorn tossed with drippings and bits of crumbled bacon) are phenomenal bar snacks, as are bacon-wrapped chicken livers, dates, and shrimp. Candied or spiced bacon (bacon coated with brown sugar and/or spices and baked until crispy) is a great snack all on its own, but can also be used in sandwiches and burgers to make them stand out from the crowd. House Peppered Bacon make a great garnish in an upscale Bloody Mary.

Bacon jam. This slow-cooked, plus-one condiment of bacon, onions, brown sugar, and cider vinegar is being used widely and creatively on menus. It adds zip to sour cream, depth to vinaigrettes, and elevates humble dishes like roasted Brussels sprouts to new heights. Slathered on a burger with caramelized onions and blue cheese, bacon jam can make a person forget all about ketchup. For breakfast sandwiches, bacon jam can infuse every bite with that smoky, savory, sweet flavor that pairs so naturally with eggs and cheese. A basic Bacon Jam recipe works well when adding additional flavors like chipotle, sundried tomatoes or bourbon glaze.

Bacon-mayonnaise. This is an even easier plus-one application. Fine-grind cooked bacon and blend it with commercial mayonnaise for a signature condiment that will differentiate your sandwiches from the competition’s.

These simple, yet clever, applications are the next progression of the bacon trend: utilizing bacon as a potent, and popular, flavor source without resorting to gimmicks.

Diners love the familiar with a twist, so one of the best ways to please a porcine-loving palate is to bring on the bacon in new ways. Here are just a few:

Pulled bacon. This succulent preparation method has tremendous potential. Start with whole-slab, smoked, cured bacon. Brine it overnight in sugar, salt, and two parts apple juice to one part water to draw out the smoke and tenderize the meat. Braise the slab until spoon tender, allow it to cool, and then shred the meat by hand or with a fork—this helps break down a significant amount of fat, allowing it to be reabsorbed into the lean parts of the meat.

Pulled bacon is unsurpassed as a sandwich stuffer and for use in street-food-style tacos. It can also be used as a garnish for burgers.

Generally braised until tender, then pressed overnight with a weight and chilled, pork belly can then be cut into cubes and crisped in a pan or over the grill. The high heat serves to render a good portion of the fat while caramelizing the outside for pillowy layers of tender meat, melty fat, and a bacony-crisp exterior. Small amounts of pan-seared pork belly add a flash of smokiness, luxuriousness, and an unforgettable taste experience to a wide variety of dishes. Cut into half inch cubes, then deep fried until crispy, bacon croutons are a unique additions to entrée salads. Menu it glazed or served with a dipping sauce as a shared plate or snack. Add it to simple pastas or Cubano and bahn mi sandwiches. Sprinkle it over mashed potatoes or hearty, oven-roasted vegetables. Remember, it only takes a little—e.g., an ounce or so for skewers or 4 ounces for pasta or vegetable dishes—to make a big impact.

Pancetta. Bacon’s continental cousin is cured—but not smoked—pork belly. It has a subtle flavor, especially compared to the up-front smoky sweetness of bacon. Pancetta can be a welcome alternative, especially when you may be looking to highlight other flavors in a dish. As a base for pasta sauces and soups, pancetta provides deep, meaty, craveable umami flavor. Add it to pork burgers for a juicy, flavorful patty that can offer tremendous competitive advantage. Sliced paper-thin and crisped on the flat-top grill or in the oven, pancetta can top everything from salads to crostini; it’s particularly delightful as a garnish for rustic soups.

While some of today’s more extreme bacon offerings (such as all-you-can-eat baskets) may have a limited life, it’s safe to say that with its huge potential to enhance flavor, perceived value, and profitability, bacon will remain a staple go-to ingredient for chefs and operators in all restaurant segments.