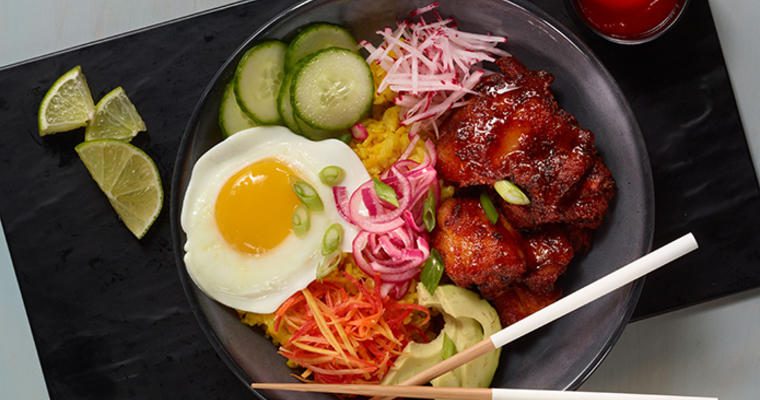 In 2008, Los Angeles chef Roy Choi’s roving taco truck, Kogi, ushered in a new era in which $2 tacos filled with Korean BBQ attracted crowds by the thousands. The concept was simple: traditional Korean flavors stuffed into a corn tortilla. It was a grand-slam home run.

That surge marked a reinvention of fusion cooking. The focus is on flavor, the attitude is casual and playful, and the dishes have mass-market appeal. Our Gordon Food Service tasting tours found many drop-dead delicious mashup dishes—from cereal-crusted scallops to rainbow-cauliflower nachos—that exemplify what makes American cooking so exciting.

Just about anything deep-fried is pretty much guaranteed to be a winner, and imaginative takes on egg rolls offer an opportunity to create something not easily replicated at home. The chorizo egg roll at Saucy Porka in Chicago is filled with Mexican queso, sweet potato, and red cabbage, served with avocado aïoli for dipping. Cochon Volant, also in Chicago, takes a continental approach with Croque Madame egg rolls filled with ham and cheese and served with “super hot” French mustard. A curious addition to this category is the Wontaco from Baocos, which is neither a wonton nor a taco, but an egg roll stuffed with sirloin steak and pepper Jack cheese, fried and then split lengthwise; each half is stuffed with lettuce, onion, tomato, salsa, guacamole, and sour cream.

These spuds are for you

Smothered fries—from poutine to chili-cheese fries—will never lose relevance in the landscape of American comfort food. Chef-driven versions, like the mussel and tomato chorizo poutine at Ox & Son in Los Angeles, elevate this concept into righteously addictive dishes; topped with eight-hour tomato sauce, Cotija cheese, and fresh dill, this was one of the best things we tasted on our tour. The aptly named Frite Street in Chicago features fries topped with everything from Korean-style pork belly and kimchee to Italian-style hot beef with giardiniera and provolone. For my money, the Guinness-gravy poutine with cheese curds and peas was the standout with its nod to classic pub fare.

Bowls—rice or noodles—have huge customer appeal and offer loads of opportunity for creativity. In New York, Shalom Japan brings together the unlikely concept mashup of Jewish deli and Japanese sushi bar. Their lox bowl, filled with rice, cucumber, Japanese pickle, and avocado, is a brilliant combination that makes you wonder why there aren’t more Jewish-Japanese restaurants. The Italian ramen at All’onda in New York immerses pleasantly chewy, handmade noodles with a Parmesan-dashi broth swimming with thinly sliced porchetta and shaved Brussels sprouts. Squirl in Los Angeles serves a brunch bowl of brown-rice porridge with toasted hazelnuts and pear jam for an upmarket alternative to oatmeal.

The bottom line? These dishes are not overly complicated, and that’s what makes them work so well. The best mashups are based on combinations of just two or three flavor profiles. They’re carefully thought out, and—I can’t stress this enough—they’re well executed. Those Kogi tacos that started it all? The two crisply griddled homemade corn tortillas, double-caramelized Korean barbecue, salsa roja, cilantro-onion-lime relish and a Napa romaine slaw tossed in a chili-soy vinaigrette—they’re handcrafted every step of the way.