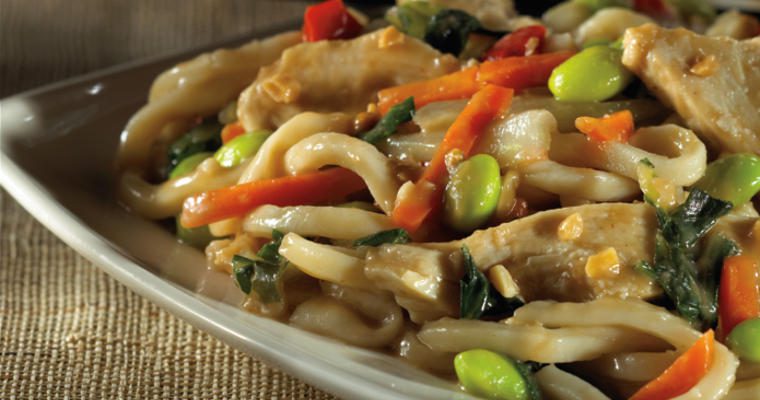 We talk about global flavors as a sweeping trend throughout foodservice, but how’s it playing in colleges and universities? Made up mostly of Millennials—a demographic we continually hear is food savvy and flavor bold—is that indeed true? To find out which global flavors resonate with college students, we checked in with three well-known campuses: University of San Diego (USD), University of Missouri and University of Massachusetts Amherst (UMass).

It seems the bright, aromatic flavors of Vietnam and Thailand capture the hearts of college students. “The Vietnamese pho is incredibly popular with our students,” says Ken Toong, Executive Director of Auxiliary Enterprises at UMass. Guests choose the vegetables and protein that goes into this one-bowl dish, and they select from fragrant broths: chicken, vegetable, and green-curry. Their custom builds are then combined with rice noodles and cooked à la minute. “They want authentic and they want it prepared in front of them. Fresh is very important to college students,” says Toong.

At University of San Diego, the pho is a top seller, but it sees a fusion of global flavors. It features Japanese yakisoba (buckwheat) noodles. Guests can choose from chicken, vegetable or lemongrass broth, or green curry sauce. Thai basil, citrus, cilantro, hoisin, and sriracha make up the bowl set up. Protein choices include a Korean bulgogi.

Missouri used to run pho, but this Midwestern campus has swapped it for a ramen bowl. “The pho was well-liked, but it didn’t have the broadest appeal,” says Eric Cartwright, Certified Chef de Cuisine, Executive Chef of Campus Dining Services. “There’s a familiarity with ramen. Ours features a flavorful broth, but it’s less soupy than pho,” he says. Guests can choose their broth and protein, then a combination of nori, ramen, egg, cilantro, vegetables, green onion, and bean sprouts. Banh mi is another hit here with customizable finishes of daikon radish slaw, kimchi, green papaya salad, or sweet-hot marinated cucumbers.

“We lure them in with gateway sushi, then lock them in with bolder combinations. It’s all about building a rapport,” says Robert Garnity, Station Chef at USD. Rolled to order and customizable, hugely popular global mash-ups include the “Special Special,” which sports tempura shrimp, avocado, jicama, jalapeño, cream cheese, ebi (cooked shrimp), chipotle mayo and eel sauce. “We blow torch the shrimp to caramelize it,” he says.

UMass’ Toong agrees that college kids like sushi. “They see it as an appetizer. It’s the most popular thing we sell,” he says. His staff makes more than 3,000 traditional sushi rolls daily. Interestingly, 25% of those orders feature brown rice.

Chipotle’s fresh-authentic-fast model has influenced UMass’ Mexican concept, Tamales. And at Missouri, Cartwright describes the strategy as a “ground beef and orange cheese-free zone.” Offerings include the college favorites of tacos and burritos, but also Yucatan-style pork shoulder, slow braised in achiote, lime, and sour orange.

With the University of San Diego’s proximity to Mexico, it’s no surprise that Latin flavors permeate the menu—from authentic barbacoa on breakfast grits to its mash-up of carne asada fries. Those fries are finished with sour cream, guacamole and salsa fresca.

Back at Missouri, the Korean Street Tacos bring the street food global fusion to campus: 4-inch flour tortillas with soy-marinated and quick-seared beef, pickled Napa slaw, and Sriracha. “We keep it tangible, but show them the integrity behind the product,” says Cartwright.

UMass added a twice-a-week dim sum station, and it’s performing very well. “The students can’t get enough dim sum, which was surprising, really,” says Toong. He credits their success to the fact that they’re somewhat exotic and that they carry a health halo. “They like the variety and that they’re steamed, not fried,” he says.

Another Asian trendsetter is kimchi—students at Missouri can’t get enough of that funky fermented Korean condiment, says Cartwright. He features its sour, pungent flavor in a kimchi fried rice and as a side dish in the grab-and-go. “They eat the heck out of it,” he says.

Global flavors add bold accents to familiar dishes, and they help open up a world of culinary discovery at colleges and universities.