Milk It with Cereal-Infused Milks

Childhood nostalgia and the craft cocktail movement are coming together to create a new beverage opportunity—cereal-infused milk.
Culinary Ideas 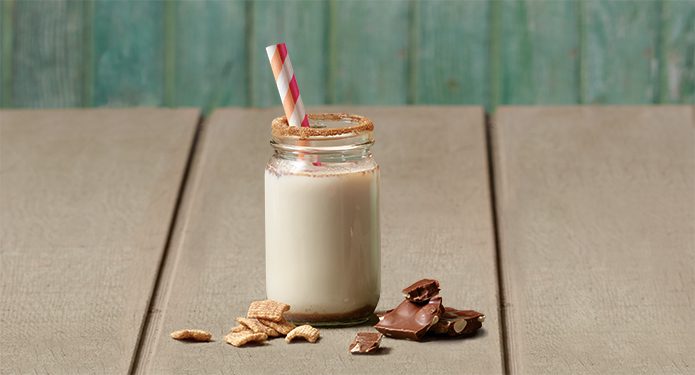 Who among us, growing up, didn’t love watching Saturday morning cartoons with a bowl of high octane sugar cereal, slurping up the dregs of sweet, marshmallowy-flavored milk? Recreating these childhood memories drove Christina Tosi, famed pastry chef behind the Milk Bar mini empire, to create her own version of cereal milk back in 2008 (she used Corn Flakes, with a touch of brown sugar and salt) and the concept pretty much took off from there.

What started as a fun, flavorful base for panna cotta quickly became cereal milk soft serve and milkshakes, bottled cereal milk and eventually its own trademark. Cereal milk became kind of a thing.

Fast-forward and the demand for imaginative craft cocktails put fresh wind into the sails, merging with the nostalgia of cereal milk by using the infused milk as a mixer for signature drinks. Gordon Food Service Corporate Consulting Chef Gerry Ludwig, CEC, and his team took note of this trend at LA hotspot Nighthawk Breakfast Bar in Venice, CA in early 2017. An ode to late-night breakfast and a balm for after-hours club goers, Nighthawk is only open from 8 p.m. to 2 a.m. and is such a runaway success that a second location is opening soon in Chicago.

On the forefront of their menu, which includes crispy-cereal coated French toast and a mug full of candied bacon slathered in hot sauce, is boozy milk infused with Cinnamon Toast Crunch, Cocoa Puffs or Fruit Loops. These cocktails hit all the right notes—approachable, easy to understand and more importantly, “The flavors were absolutely delicious,” Ludwig says.

At the annual Flavor Experience, a three-day conference packed with menu-ready ideas and street-level insights, Ludwig and team prepared samples of the spiked cereal-infused milk: “It was a grand slam,” Ludwig says. “People were crowded around, grabbing the cups as fast as we could make them.”

The master recipe, perfected in the Gordon Food Service test kitchen, calls for caramelizing the cereal in the oven (300 degrees, for about 20 minutes) and combining with milk to steep for about half an hour. Then strain – either through a fine mesh strainer or cheesecloth – and it’s ready to serve. Ludwig says that almost any flavor combination works, but some of his favorites are Cap’n Crunch with cinnamon whiskey, Fruit Loops with tequila, and Reese’s Puffs with plum brandy for a play on PB&J. While these quirky cocktails don’t need a garnish, a functional and easy to execute accompaniment can enhance the presentation and whimsical profile. Ludwig points to retro candy (like Bit-O-Honey paired with a Honey Nut Cheerios infused milk), skewered fresh fruit or using the marshmallows from a box of Lucky Charms.

While cereal milk itself has been around since … well … cereal, these amplified creations offer an opportunity to be first-to-market with a leading-edge trend. The sweet spot here is weekend brunch; spiked cereal milk is definitely a day-off indulgence. Booze-free versions are perfect for kids, and the flavored milk can be pre-assembled in retro mini milk jars for service. There are really no limits to the possible combinations, although cereal varieties that don’t skimp on sugar take on more caramelization, and flavor, in the oven.

Try these cereal-infused milk recipes, or talk to your Sales Representative for more suggestions.