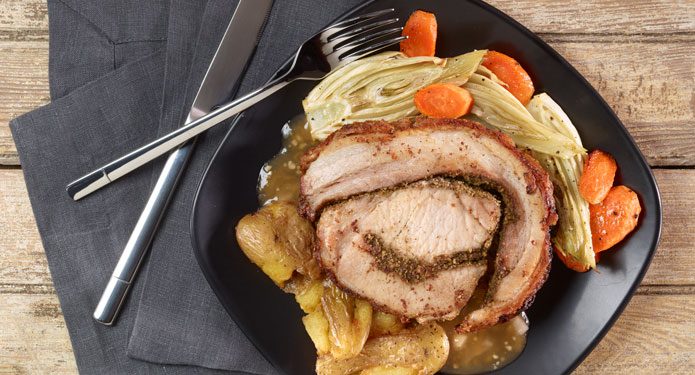 Each year my culinary team and I embark on research trips to new restaurants in New York, Los Angeles and Chicago. Our trend-tracking expeditions allow us to taste thousands of dishes and identify innovative menu opportunities at restaurants that best represent the forefront of mainstream dining.

Back in our test kitchens, we conduct extensive recipe development on ideas that stand out as particularly noteworthy. Our research gives us deep insight into the culinary evolution of restaurants, and I would like to revisit three previously highlighted preparations. I believe these ideas are well-timed to deliver valuable first-to-market opportunities.

An ancient recipe originating near Rome, porchetta remains a staple in Italian cuisine. A whole hog is boned out and slathered with a paste of fennel, garlic and olive oil, then rolled up and spit-roasted until tender with crispy crackly skin on the outside. The meat is often served as a sandwich from roadside stands, stuffed into a crusty roll with garlic aioli.

At 200-plus pounds per hog, traditional porchetta is a bit cumbersome for the average restaurant. Chef Sara Jenkins aimed to change that when she opened her tiny storefront eatery, Porchetta, in New York City’s East Village in 2008. Streamlining the process with a skin-on belly and loin, seasoned with the traditional herb paste, Jenkins’ version still hits all the high points: crackly skin, sensationally tender meat and a punch of flavor from the fennel.

In the following years, porchetta has become somewhat mainstream in major cities, but there is still a lot of opportunity to stand out. Held warm and sliced thin for sandwiches, porchetta can also be chilled and sliced thick for a stunning entrée plate. With slices seared to order in a pan, the pork remains juicy on the inside with a crisp and caramelized exterior.

Bring on the bacon

On its long march from pioneer breakfast staple to culinary birthright, bacon still reigns supreme. While bacon frenzy has spawned everything from bacon wrapped bacon to the “bacontini,” enterprising chefs are continuing to draw tasty inspiration from America’s favorite pork product. Pulled bacon is one of the most brilliantly simple ideas to have emerged. We encountered pulled bacon on a sandwich at Animals, a tiny eight-stool annex attached to The Wayland, a popular bar in Manhattan. It starts with whole slab bacon (cured and smoked, not fresh pork belly) marinated in apple cider and bourbon then braised like pot roast. Hand shredded, the fat reabsorbs into the leaner parts of the meat for a final product that is more than the sum of its parts: wonderfully flavored, sweet-and-smoky and spoon tender. It is infinitely adaptable, not difficult to make and relatively inexpensive.

What we call a “briolle” is simply a cross between brioche and roll, a self-contained handheld meant to be eaten like a sandwich. As a concept, stuffed brioche is a classic. From savory ham and gruyere to the legendary Tarte Tropezienne, encasing tasty fillings with tender, buttery dough is a no-brainer. The fillings are limited only by your imagination: Italian sausage and provolone, scrambled eggs and bacon, blueberries and cream.

Using our preportioned Sienna Bakery® Briolle® Dough rounds, assembly is streamlined and efficient. The rolls go straight from prep table to oven with no proofing, and our instructional video shows you how to roll and fold briolles for a consistent and compact final product. Briolles are at their best freshly baked, but because they contain proteins, cheese and vegetables or fruit, the final product is extremely tender and holds up well under refrigeration. A quick reheat in the oven makes them table-ready in under five minutes.

Being first to market with a craveworthy concept is incredibly valuable. Not only does it create menu differentiation, but it also drives new customers through your door. All three of these preparations–porchetta, pulled bacon and briolle–have broad appeal while allowing for creative license and menu adaptation. As such they present singular opportunities for mainstream operators to capitalize on customer demand with delicious results.