The new global guidelines provide consistency for caregivers at all levels and safety for people with dysphagia.
Healthcare, Running Your Business 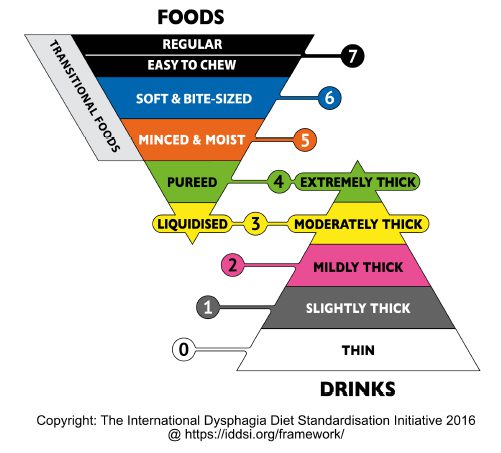 When your favorite team loses, it’s hard to take. When someone gives a wild excuse for being late, there’s frustration. We call such instances hard to swallow. For people living with dysphagia, hard to swallow is more than just a figure of speech. Swallowing can be dangerous, especially when it comes to consuming foods and beverages most of us take for granted.

When food and drink is difficult to swallow, it’s important for people to consume food that has the right texture. Until now, there’s never been a defined standard for modifying the texture of food and liquid. All that’s about to change, thanks to the introduction of the International Dysphagia Diet Standardization Initiative (IDDSI). It’s a global initiative to standardize diets for people with swallowing disorders.

IDDSI has the support of the Academy of Nutrition and Dietetics (AND) and the American Speech Language Hearing Association (ASHA). These standards also are being implemented in Canada, a multi-year process that started there last year, according to Gordon Food Service Healthcare Segment Manager Dana Fillmore. The U.S. is just starting the same multi-year implementation, and it will require a phased-in approach to allow healthcare professionals and organizations to incorporate standards and terminology, as well as conduct training.

For foodservice vendors and distributors, it’s a big undertaking to change labeling, modify menus and update recipes. All of these things take time, Fillmore says, but Gordon Food Service is committed to following the initiative and is aligned with the AND and the ASHA, who are working to phase in the changes together.

Why is the initiative important?

The consistent application the standard seeks to achieve is critical to care in the 21st century, Fillmore says. As people move from one care center to another more frequently, it’s vital that people with dysphagia are provided the consistency of food and beverage that’s best for them.

“What’s considered honey consistency to one might be syrup to another,” she says. “These are very non-standard and interchangeable terms in a place where the thickness and texture of the liquid or food is so important to the patient’s health. We need consistency.”

The new IDDSI diet standards approach thickened liquids and solids with descriptions, not textures related to common products such as syrup or honey or nectar. There are eight levels of thickness and texture that cover liquid and solid foods.

With the IDDSI framework in place, a hospital patient who is released to post-acute care with a “Liquid Level 3” order will be given liquid that is the proper thickness, not a honey, syrup or nectar texture that is not easily tested in a kitchen.

The testing methods are key to the IDDSI, not only telling caregivers how thick products are supposed to be, it’s offering practical ways to check liquid or food thickness.

If you work in the kitchen and need to make the lemonade to a particular thickness, there’s a fork test—dip a fork in the liquid and then clock how quickly the liquid falls from the fork’s tines to determine whether it meets “Liquid Level 3—Liquidised (for liquids) or Moderately Thick (for foods).”

“Instead of looking at something and saying, ‘Yep, that look about the same as honey,’ now there’s a test that provides consistency,” Fillmore says. “They only take a second or two each time you prepare a product.”

There may be adjustments as the IDDSI standards are implemented, Fillmore notes. She says the healthcare industry is watching how the standards are working in Canada and other places so the implementation in the U.S. goes as smoothly as possible. One thing, however, is certain: the IDDSI common terminology and testing standards will improve safety for people with any level of dysphagia.

Listen to our podcast

We have produced a podcast titled “IDDSI: Moving Past the Awareness Phase.” We sat down with three experts who walked through what IDDSI is and how implementing it can help improve the lives of people living with dysphagia. Please send any feedback about this podcast to nrc@gfs.com

Visit iddsi.org to learn more about the framework and the upcoming support to incorporate the standards in your organization.

Supplementary Notice: Modification of the diagrams or descriptors within the IDDSI Framework is DISCOURAGED and NOT RECOMMENDED. Alterations to elements of the IDDSI framework may lead to confusion and errors in diet texture or drink selection for patients with dysphagia. Such errors have previously been associated with adverse events including choking and death.