Humble no more, hash browns are being innovated and elevated on menus everywhere, and these spuds are for you, too.
Culinary Ideas 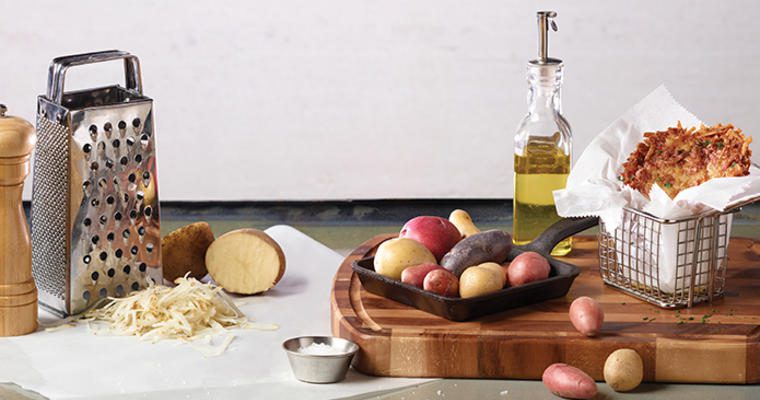 All-day dining is on the rise. A quest to extract maximum sales from a single footprint combined with the continued trend of high profile restaurants opening in hotels has resulted in a tremendous amount of early morning innovation. Returning to classic preparations reimagined with a modern palate, chefs have directed their considerable talents and ingenuity toward breakfast dishes that can be enjoyed anytime. In particular, they are taking economical potatoes and applying creativity to distinguish their menus with unique and craveable hash browns.

Hash browns are bringing crispy-crunchy comfort to handhelds, salads, snacks and entrées. These artisanal hash browns are not an afterthought; they are carefully constructed, signature hash brown patties.

The “gas station sandwich” at City Mouse in Chicago features a perfect disk of crisp and fluffy hash browns scaled precisely to a toasted English muffin along with a fried egg, cheese, sausage patty and grape jelly. Los Angeles-based Gesso also crafts their hash brown patty to fit neatly on the “everything” Kaiser bun they use for their bacon, egg and cheese sandwich, although they use a waxy variety of potato. The result is a more prominent potato strand with deeper caramelization due to the increased sugar content—a pleasurable complement to the arugula and guajillo ketchup that finishes the sandwich.

Straying from the classic format, Sunday in Brooklyn tops their egg sandwich with a generous flurry of micro-shredded crispy potatoes—a nice textural contrast to the soft scrambled eggs, sausage, cheddar and gochujang aioli. The collaboration burger at The Cannibal Liquor House in New York City stacks an extra thick beef patty on a base of perfectly round hash browns, along with cheddar cheese and candied bacon, allowing the hash browns to soak up the juices while retaining their crunch. Empellón Midtown, also in New York City, features an elegantly formed oval of deep-fried hash browns reimagined as a taco, tucked into a soft corn tortilla with onions, poblanos and tomatillo guajillo ketchup.

Rosti potatoes, formed and fried in a pan with clarified butter, are hash browns’ continental cousin. The cooking technique results in a beautiful cake—deeply caramelized and intensely crunchy, the waxy potato allowing the strands to retain their integrity.

At Winsome in Los Angeles their “all day” menu features a thick, crunchy rosti patty with sunny-side-up eggs and a choice of toppings, like smoked salmon and fennel pollen or house-made corned beef with charred cabbage and creamy house mustard. The salmon rosti at New York City’s Made Nice is a stunning composed salad with frisee, smoked salmon and soft boiled egg, but the distinguishing aspect is the garnish of crispy cubes of rosti potatoes. Functioning as a way-better crouton, the shredded potatoes are lightly bound with egg and flour and pressed into a pan. At this point, any shape can be cut and deep fried. The nigella seed potato crisp at De Maria in New York City is a perfectly formed two-inch cube, fried to a deep golden brown. The nigella seeds add a wonderful onion flavor, and the crispy cake is paired with a turmeric-poached egg, chorizo and aji mayo.

Serving up innovation at any time of the day drives sales, and incorporating breakfast trends is a smart move regardless of your hours of operation. Using a wider range of techniques results in unique final products, like the cheddar hash browns at BäcoShop, in Los Angeles, which are loaded with shredded cheese and formed into rounds that more closely resemble arancini or hushpuppies than traditional hash browns. Whether they’re a snack, a side or part of a composed plate, hash browned potatoes offer tremendous potential.