Get Plugged Into Gen Z

They’re young and adventurous. Learn how to link up and stay connected.
Running Your Business 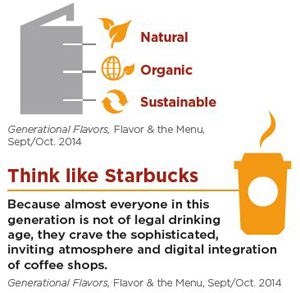 Kids these days—they’re the most technologically well-connected people you’re ever likely to come across. Generation Z lives in a 24/7 world, where they’re always plugged in and able to get what they want at almost any hour. They eat out four times a week, according to the October 2014 edition of Table Tracker, but because of their age and relatively low income, they’re also frugal, with less money to spend at each meal. Sharing plates and combo meals are a popular way to give them low-cost variety and the fast, efficient service they crave.

They make up 7% of the North American workforce, and they are its most-diverse group. They were raised in an online world that ignores most social, economic, and racial boundaries.

They’re young, but they’re very much in touch with their world. Certain words speak volumes, and resonate with Gen Z:

The Reviews Are In

Online comments about your restaurant matter, so pay attention.

What Can Operators Do to Attract to Gen Z Workers?

This generation doesn’t know the meaning of long- term employment. They act as free agents, seeking opportunities that appeal to them in the moment.

What Matters to Gen Z?

When it comes to work, this generation has a global outlook.

26% of all 19-year-olds currently volunteer.
If your operation participates in community projects, it will appeal to this group.

76% are concerned about humanity’s impact on the planet.
A green initiative is something these workers really get behind.

You don’t have to speak their language to communicate with Gen Z workers, but you do have to know how they absorb your message.