Buying power and more time to eat out make them influential and essential.
Culinary Ideas, Healthcare 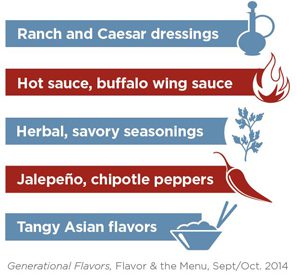 It’s tempting to focus on the trendy, younger dining crowd, but don’t overlook the baby boomers. Consumers born during this era have major buying power and more time to eat out than other generations. This aging demographic favors more traditional flavors and protein dishes, but they also are at a stage in their lives where health concerns affect what they order. But order they will: according to Restaurant Hospitality magazine, boomers purchase an average of 193 restaurant meals a year, with an average check of $8.05 per customer. Those are numbers no operator can afford to ignore.

Who Are the Boomers?

They are a very influential group—44% of the population with 70% of the disposable income—but they also have been influenced. The Cold War, assassinations, civil rights, political scandal, and space travel have been major factors in their lives.

Generational Differences in the Workplace, Horizon Health and How to Tweak Server Habits for the Baby Boomer Crowd, Restaurant Hospitality, 2014

Boomers are not terribly adventurous eaters. They favor traditional beef, pork, and seafood dishes, but they are willing to amp up the flavor with:

Boomers demand value, so remind them they are getting the most for their money with these key callouts:

Although they have money to spend and time to spend it, boomers are not night owls. With this in mind, Restaurant Hospitality magazine suggests a marketing strategy that offers early evening specials to boomers. Then, later in the evening, dim the lights, turn up the volume, and invite a younger, more active crowd. Consider these other ideas to boost your boomer appeal:

Beyond Price and Value

It takes more than a good deal to satisfy boomers. They also enjoy friendly and attentive service, and they’re paying attention to health-related callouts: