Proposed changes simmering in Congress could change the allocation of federal funds for food and nutrition.
Education, Running Your Business 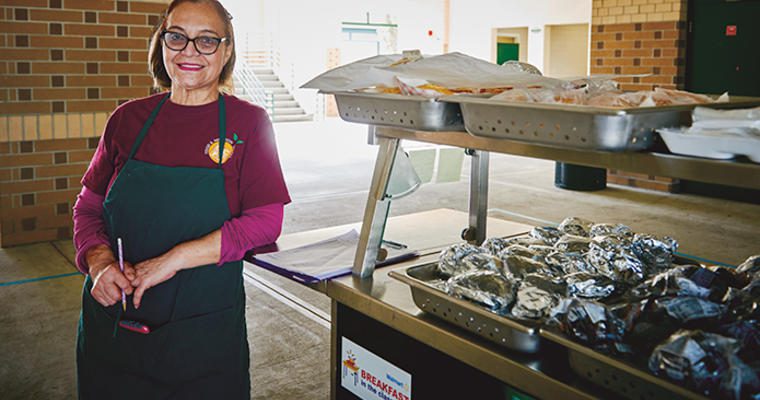 While school foodservice operations across America focus on serving delicious, nutritious meals to 30 million students every day, lawmakers are quietly considering a plan to drastically change school meal rules and block grant funding. If they succeed, says Sara Gasiorowski, SNS, Director of Child Nutrition Services for the MSD of Wayne Township, “There is no doubt the federal school meal program as we know it will end.”

Gasiorowski serves as Public Policy & Legislation Committee Co-Chair for the Student Nutrition Association (SNA), which is leading opposition to the proposed changes. She and her SNA colleagues have launched a multipronged lobbying initiative aimed at Congress.

First, a look at where we are today: In 1946, the federal government made a commitment that students would always have access to healthy meals at school. Congress designed the National School Lunch and Breakfast Programs as entitlement programs—participating schools are “entitled” to a federal reimbursement for all meals served. Federal regulations and nutrition standards for these programs ensure that meals and student access to them are consistent from state to state.

Now, some members of Congress have proposed changes to the way these programs are funded. They want the federal government to send a fixed amount of money to a state and ask the state to develop its own school meals program, with little or no federal standards or oversight. This is referred to as “block-grant funding.”

A decrease in funding

In a block grant proposal introduced in 2016, funding would be capped at the amount the state received in free- and reduced-price meals in fiscal year 2016. The proposal also eliminates annual inflationary increases, all paid meal reimbursements and the six cents per lunch schools receive under the Healthy, Hunger-Free Kids Act.

The nonpartisan Center on Budget and Policy Priorities estimates this would cut funding to schools by 12 percent after three years.

The proposal also would prevent schools from receiving additional federal funds if the demand for school meals grows because of factors such as rising enrollment, local recessions or natural disasters. Schools would need to come up with their own funding.

“For the first time, increasing school meal participation will be seen as a liability to a school,” Gasiorowski says in a webinar available on the SNA website. “Even if school meal programs experience steady or declining participation, programs will still experience crippling losses under block grants.”

The SNA has created a “Block Grant Calculator” enabling schools to measure potential losses to their meal programs. Some districts and states have shared their numbers. For example, North Carolina projects a cumulative loss of more than $131.3 million.

Schools may have to cut corners

“When our losses mount, you can bet we’ll be under pressure to cut corners,” Gasiorowski says. Harmful effects could include:

The SNA argues that block grants would force some states and school districts to raise taxes—and that the change in funding would put more children at risk for hunger and obesity, as they may no longer be able to access healthy, nutritious meals at school.

The case for block grants

Proponents of block-grant funding disagree with SNA’s claims. Depending on how the block grants are set up, they say, individual states could be empowered to design programs that are more innovative and attuned to local needs.

For example, according to an analysis by the Congressional Budget Office (CBO), “States could set different thresholds for free- or reduced-price meal eligibility, offer assistance only to schools with high levels of poverty, or set their own nutrition standards. The resulting experimentation could give other states information about which approaches better improve nutrition, what is an appropriate amount of assistance, and what is the most economical way to do so.”

Implicit in these arguments is the idea that the federal government is neither the most effective nor efficient means of establishing and maintaining local policies. That philosophy is a common theme for President Donald Trump, his administration and many in Congress. A block-grant approach also would allow lawmakers to fulfill another stated goal—to reduce federal government spending.

A CBO analysis in 2015 estimated that block-grant funding would reduce federal spending by $21 to $81 billion from 2016 to 2025, depending on the level of the funding and the rate of inflation.

Where we are today

Two years ago, Representative Todd Rokita of Indiana introduced “The Improving Child Nutrition Act of 2016 (H.R. 5003)”, which called for a pilot test of block-grant funding in three states. The bill passed the Committee on Education and the Workforce in the House of Representatives, but competing legislative priorities meant it never progressed to a full House vote.

In February 2018, United States Department of Agriculture (USDA) Secretary Sonny Perdue was asked whether he thought the block-grant approach outlined in H.R. 5003 would come to be. “There were probably a lot of conversations about block grants, and I don’t know that any of those will come to fruition over that,” he said. “I think Congress as a whole, primarily Democrats but even Republicans as well, don’t have the greatest trust on block grants in these kinds of programs.”

Still, SNA and its allies are concerned the idea will resurface. That’s why they want to raise awareness for schools and parents.