Are robots the remedy for labor shortages? 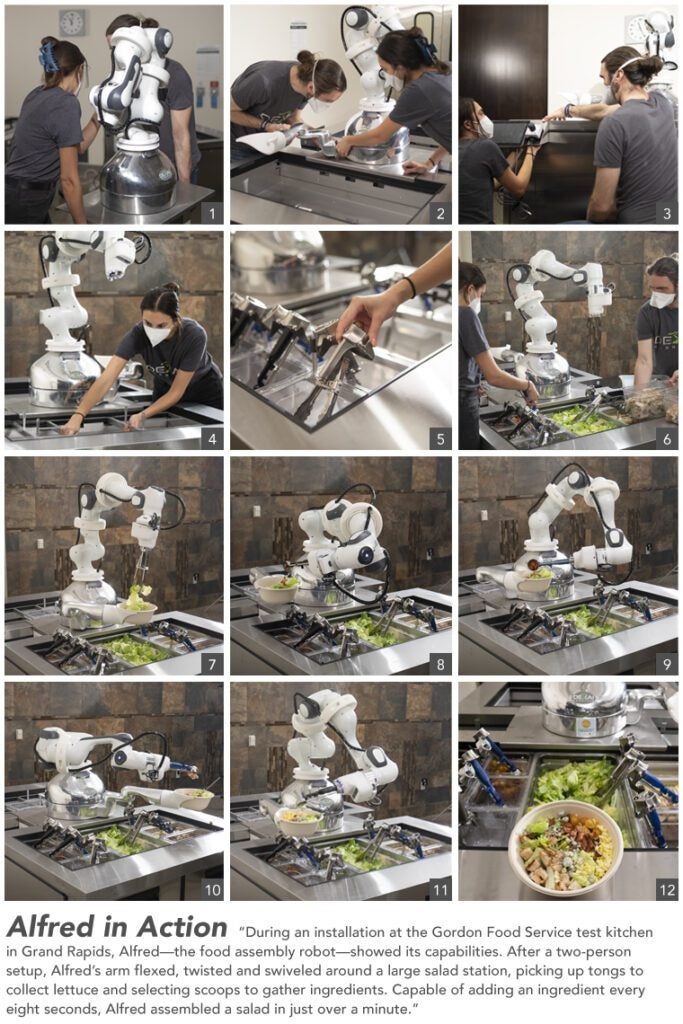 From online ordering to touch-free menus, the past two years have seen technology lend a big hand to foodservice. Soon, robot meal prep could lend an entire arm.

We asked Johnson to explain how this tool could be a game-changer.

Who is best suited to use Alfred today?
“Initially, it’s going to be in non-commercial or large-scale settings, like healthcare, cafeterias, commissaries, convention centers, catering, grab-and-go,” he said. “It’s not geared toward high-end dining as much as it is high-volume throughput.”

Why would an operator turn to robot technology?
He cites several reasons: labor, speed, accuracy, consistency, costing and safety. “We help operators with efficiency. They can load up a table with ingredients and let the robot assemble 100 grab-and-go chicken Caesar salads. You no longer need to have a body to do that, the machine doesn’t take breaks or call in sick. … It really goes to labor savings.”

A skilled worker might be able to assemble a salad faster, but Johnson thinks of it like the tortoise and the hare fable. Humans get bored and make mistakes, but the robot never gets fatigued. While Alfred is making salads, your skilled kitchen team can focus on other tasks.

What about accuracy and safety?
The robot uses a camera and learning modules, so it recognizes the difference between feta and blue cheese, romaine and kale, tomatoes and olives, etc., and always selects the correct ingredient. Built-in scales portion each item according to an operator’s recipe.

“Whether it’s a salad, a harvest grain bowl or a poke bowl, you can track your usage,” Johnson said. “Because you know much went into each salad, you can compare it to your inventory. You have real metrics on what you’re selling, and you might find gaps like spoilage or bad trimming.”

The robot enhances safety because it’s incapable of using the same utensil on multiple ingredients, reducing the risk of cross-contamination. Operators also get alerts when ingredients have been out too long, helping with HAACP tracking.

Robot technology isn’t cheap, so how will I make money?
Dexai’s model is a pay-as-you-go service contract, Johnson explained. “The return on investment is immediate—operators pay a variable cost for each meal the robot makes. Because that cost is lower than what they were previously paying someone to assemble the meals, they are making money right from the beginning.”

Is setup difficult? And what about operational programming and repairs?
Alfred unfurls from its storage fetal position and is ready to operate in as little as 15 minutes. The kitchen manager is responsible for designing recipes and entering them into a web portal. Once ingredients are placed in front of it, the robot is responsible for making the recipes.

“We own every robot, and the contract provides remote service. Most things are fixable by software,” Johnson said. “Very rarely does anything physically break—they’re designed for automotive or electronics manufacturing, so they’re supposed to run for 10 years without any stops.”

Next up for Alfred
Dexai is developing robotics for other kitchen tasks, including grills, ovens, mixers and  beverages.

What’s next after salads and bowl builds?
Ideas on Dexai’s radar include Alfred Grill, Alfred Pizza, Alfred Drinks and Alfred Plating. Johnson is working on a robot capable of turning on a grill, placing and flipping foods as they cook. Topping a pizza is not a huge leap from assembling ingredients on a salad. Don’t be surprised if your coffee barista one day is a robot.

“We haven’t done a sundae or a banana split yet … that’s one we should do for fun,” Johnson quipped. “We love to solicit new ideas. If people can dream up a thing for Alfred to do, we’re always listening.”