Links between diet and heart health is at the center of the plate for this grab-and-go operation.
Healthcare, Running Your Business 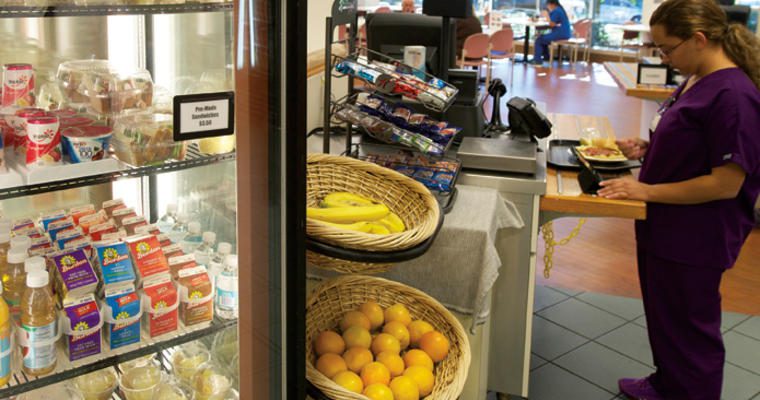 Regional Medical Center Bayonet Point (RMCBP) is a 290-bed acute-care facility in Hudson, Florida, at the northernmost point of the Tampa Bay metropolis. In addition to nationally recognized cancer, orthopedic, and neurosurgery programs, RMCBP is home to the nationally acclaimed Heart Institute, which has been awarded numerous accreditations and awards by the Joint Commission, the American Heart Association, and the American Stroke Association, just to name a few.

Given its strong emphasis on cardiac care, RMCBP has long focused on the link between nutrition and heart health. Patients have always received meals that meet appropriate calorie, salt, and fat guidelines. Community education classes on heart-healthy nutrition are offered on a regular basis. The hospital’s Facebook, Twitter, and blog pages are jampacked with healthy-eating tips.

The link between diet and other diseases, including diabetes and certain cancers, is also explored in detail. It should come as no surprise, then, that employees and visitors who stop by the hospital’s Shoreline Cafeteria are also presented with healthy options, from meal combos to “grab-and-go” items.

“We’ve just recently made some changes to the grab and-go program,” says Louis “Chip” Buck, Food and Nutrition Services Director. “We’ve eliminated high-calorie, high-fat desserts like pies and cakes, and replaced them with yogurt parfaits and fruit cups. We’ve also made our bottled waters more prominent in the beverage case, moving them from fourth position to first position. And we’ve priced the water lower than bottled soda.” Customers had been asking for healthier choices, but the response has been even better than Buck imagined. “The new parfaits and fruit cups are way more popular than the previous desserts. They cost us less, and we’re bringing in more money with them, so it’s a win-win.

We’re also now selling more bottled water than bottled soda.” Buck is currently mulling over new ideas to expand this “healthy retail” initiative. “We offer sandwiches, milk, some juices—things like that … primarily intended for people to take with them back to their desks or for the overnight shift, when the cafeteria is closed,” he says. “And we’re always looking for new opportunities to introduce better nutrition.”

Building on a Legacy

That commitment extends as far back as 2006, when Buck’s predecessor—Joyce Hagen-Flint—began transforming the Shoreline Cafeteria menu to reflect a greater national emphasis on healthy nutrition.

Back in 2008, Hagen-Flint told Foodservice Director magazine that a “significant portion” of the RMCBP customer base was interested in heart-healthy menus, and that one-third of its customers followed a heart-healthy regimen.

In response, she and her staff deemphasized deep-fried and cheese blanketed items and put more focus on salads and other low-calorie, low-fat items.

That focus continues today. “We always have a Healthy Plate as one of three entrée choices in the cafeteria,” Buck says. “It fits a heart healthy profile, with lower fat, calories, and sugar.” The entrée is also offered as part of a Healthy Value Meal that may include a grain, vegetable, and/or dessert.

Healthy options are offered at a substantial discount compared to standard dishes. For instance, a Healthy Plate vegetarian meal might be priced at $2.75, while the same day’s pulled-pork and chicken-quarter choices would each retail for $4.

In the almost two years since he assumed the Director position, Buck says he has added more vegetarian dishes to both the cafeteria and the hospital’s in-house catering menu. And he continues to encourage culinary experimentation on the part of his staff.

Not Afraid to Try

“Our nutritional standards for healthy meals necessitate that we produce them ourselves,” Buck explains. “We can’t rely on processed foods and premade items. It can be a challenge—if you take away the fat but you can’t replace it with sugar, what do you do?

We’ve learned how to use healthier alternatives more efficiently.” When it comes to evaluating new healthy options, Buck likes to remain open-minded. “If we introduce a new meal and it’s not received terribly well, then we won’t offer it again,” he says. “Although sometimes we believe in something so strongly that we give it some time.” For instance, he says, a hot garbanzo-bean dish started off as a slow seller but now is quite popular. The foodservice staff makes extensive use of fresh fruits and vegetables.

“We have a salad bar, and we also offer made-to-order salads.” And whole-wheat pasta has become a specialty. “We really know our way around it now.” RMCBP has also revamped its vending program to offer healthier options.

“We worked with our supplier to replace about 40 percent of existing items with better-for-you choices, and we developed a sticker that immediately identifies these foods. So you can see right away what’s a good choice.”

“Choice” is a key concept, according to Buck. “We’re not dictating to people what they have to eat. We still have plenty of ‘not-so-healthy’ options available. But we’re making it easy for people who do want to eat better, and we’re encouraging healthy eating behaviors.” In the future, Buck would like to introduce more made-to-order items, like stir-fry dishes.

“That way, people can pick and choose which ingredients they want. It gives them more control over how healthy they want to eat.”

He also would like an electronic menu board. “We have nutritionals posted in the cafeteria and on the hospital intranet, but an electronic board would be more prominent and easier to update.”

Buck’s advice for other foodservice directors venturing into healthy retail? “Don’t be afraid to try different things. Be creative. If something doesn’t really work, so what? Start over again the next day.” You’ll get credit for the attempt, Buck says, and you’ll learn something valuable along the way. It’s all about helping people eat healthy.

“That’s just the right thing to do,” he says.