Sandwiches, the original handheld, offer a prime opportunity for creative builds customers will want to sink their teeth into.
Culinary Ideas 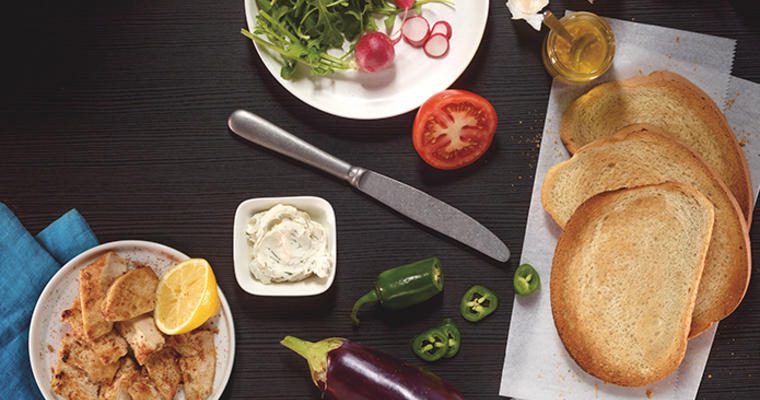 Sandwiches hold a lot of opportunity, all nestled invitingly between two slices of bread. The ultimate in familiarity, they also are the ultimate in versatility, welcoming all sorts of flavor trends into the fold. “Menuing unique, trend-forward sandwiches is a highly effective way to increase sales and promote menu differentiation,” says Gerry Ludwig, CEC, Gordon Food Service Corporate Executive Chef. He pinpoints five opportunities in the sandwich category, all with craveable, adaptable builds ready.

“Chefs are becoming more innovative in the sandwich category, exploring the different sandwich profiles around the world,” Ludwig says. The real breakthrough, of course, can be traced back to Roy Choi and his food truck, Kogi Taco, which hit the streets in 2008 with its wildly creative mashup of Korean flavors and Mexican tacos. He gave everyone permission to do the same thing with a variety of handhelds—Latin tortas and Asian banh mi sandwiches. Today, the innovation continues, offering big opportunity for menu distinction. One “new” profile that’s poised to emerge on the scene is the num pang, a sandwich that the proprietor of Num Pang in New York calls a Cambodian version of a banh mi, served warm instead of cold, and starring ingredients like spiced pork belly, roasted chicken “chimi” or roasted cauliflower.

Thanks to the sustaining trend in veg-centricity, where chefs coax out beautiful flavors through aggressive cooking and judicious use of savory protein elements, consumers are now embracing vegetables in new and unexpected places, including as the stars of sandwiches. “This may be the category where I’m seeing the greatest amount of growth,” Ludwig says. “Chefs are experimenting a lot, roasting, sautéing, shaving vegetables, and really focusing on eye-turning plate presentation.”

“We discovered this bread in California during our street-level research five years ago,” Ludwig says. Gordon Food Service brought it to market and a lot of operators now use it as their signature bread. Very similar to a ciabatta roll, the Dutch Crunch roll features a “cracked earth” crust that yields a sweet, savory, aromatic crunch.

“We’re flagging this opportunity for our customers who might have missed it the first time around, and for new customers since we first talked about churrasco sandwiches a few years back,” Ludwig says. This is a single menu item discovered at the chain Island Burger in New York, which calls itself “Home of the Churrasco.” The sandwich there saw a double-lobe boneless skinless chicken breast in a wet marinade, char-grilled, then loaded with flavorful toppings. It boasts bold flavor layerings unlike anything seen before, and holds lots of potential for interpretation.

The momentum behind this opportunity is that the meat is tender, indulgent, and craveable. “We tried to capitalize on the successful iterations we’ve seen in the marketplace over the years and put them into menu-ready recipes for our customers,” Ludwig says.

Ask your Sales Representative about recipes that can bring these culinary opportunities to your menu.