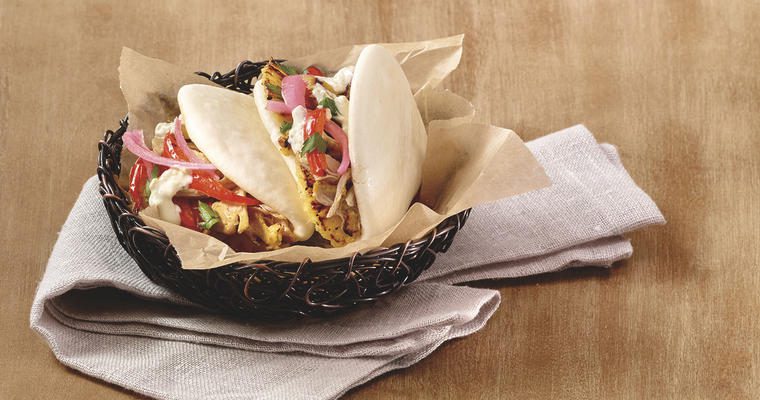 Given diners’ never-ending love affair with portable food, we are constantly on the lookout for new ways to wrap up … well, everything. Particularly for younger demographics, hand-held “mashups” offer tremendous potential for increasing sales and creating menu differentiation.

Globally savvy millennial and Gen-Z diners seek out comfort-food dishes, and for these younger generations such foods often have a global spin, much more so than for their older cohorts. That’s why three new global carriers are becoming increasingly popular. Bao buns, wonton or eggroll wrappers and Indian paratha bread are on point to become the next wave of opportunity for handhelds.

Tender, fluffy and versatile, bao buns melt in the mouth and can be stuffed with an unlimited variety of ingredients. Their appeal as a carrier is primarily textural; while salty and slightly sweet, they’re essentially a blank canvas in terms of flavor. Bao buns are an ideal opportunity for sports bars; they’re salty, snackable and a great alternative to tots and nachos.

In Chicago, Saucy Porka does a great job of reimagining traditional bao buns: Thai chicken curry with pickled slaw and pork carnitas with pineapple salsa pack in bright flavors that balance acid and salt to contrast nicely with the slightly sweet bao bun. The now-shuttered Baocos, which was also in Chicago, offered a “Southern Q” bao with shredded BBQ chicken, sweet slaw and housemade pickles, and a “Philly” bao with chopped sirloin steak, white American cheese, griddled peppers and onions and garlic aīoli.

Wonton and eggroll wrappers offer unparalleled opportunity to tap into the deep appeal of crispy, crunchy snack foods. Customized eggrolls—like the croque madame eggroll at Chicago’s Cochon Volant—create instant menu differentiation and are a snap to put together in advance. The croque madame eggroll features a filling of thinly sliced ham and cheese, the cheese melting luxuriously and contrasting nicely with the crisp exterior, served with a side of super-hot French mustard.

While fast-casual restaurants have featured wonton tacos as shareable snacks, the Baocos wontaco—curiously, neither a wonton nor a taco—opened the door to a new mashup possibility. Stuffed with sirloin steak and pepper-Jack cheese, the eggroll was fried, then split lengthwise; each half was stuffed with lettuce, onion, tomato, salsa, guacamole and sour cream. This concept would work well with many other flavor combinations.

One of the newest opportunities is paratha, an Indian flatbread. Best described as like a delicious cross between naan and a croissant, its flaky layers puff up when griddled. Paratha is particularly enjoyable as a carrier for hand-held street foods, which lend themselves well to global mashups. I’d be hard pressed to think of something that would not be delicious wrapped in warm, flaky paratha. This means there’s a great opportunity for any restaurant to take something it already does well and put a fresh spin on it.

Paratha tacos are the specialty at New York’s Goa Taco, where they are stuffed with chef-driven combinations like housemade chicken chorizo with goat cheese and charred-scallion chimichurri or paneer cheese with spinach pesto, garam-masala fried chickpeas and pickled tomatillos.

Kati rolls, traditionally a roasted kebab wrapped in paratha, are a street-food staple in India. These handhelds are primed for mainstream but are still new enough to American diners to offer plenty of room for menu differentiation. In Los Angeles, Sambar offers several kati rolls on the lunch menu. The menu changes seasonally, but good examples of its featured kati rolls are one with pork-shoulder vindaloo, Malabar hot sauce and mango chutney, and another with yogurt-roasted chicken with pomegranate, mint and peach chutney.

With opportunities for cross-utilization all-important to holding down food costs and improving efficiencies, I’d like to point out a dish that’s obscure in this country but the equivalent of a hamburger in Sri-Lanka: kottu roti. A street food similar to fried rice, kottu roti uses diced paratha bread stir-fried with vegetables and meat, then hit with a splash of curry sauce that unleashes a cloud of fragrant steam. It’s sweet and savory, salty and sour—and utterly addictive. You can add whatever you have on hand and top with a fried egg.

As with any culinary mashups, there are no real limits as long as you keep basic flavor profiles in mind. Take something you’re already doing well, and use condiments and extras to layer in flavors; two to three is plenty.