Do You Speak Seafood? Vocabulary You Need to Know 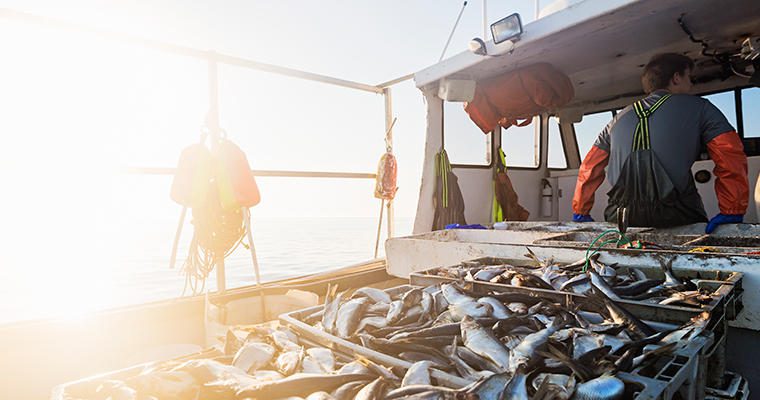 What do you call music played on a fishing boat? Doesn’t matter, as long as it’s catchy. Don’t groan. Catchwords and other terminology in the seafood business is no joke. Knowing the vocabulary and how the words apply to foodservice can make you a better buyer and help you describe menu items.

Whether seafood is used as an entree or an ingredient, few people know how seafood gets from the boat to the table. In some cases there are misconceptions about the way seafood is caught, processed and packaged. Understanding words and phrases from four categories—fishing terms, fishing methods, farming methods and industry terms—can lead you to ask the right questions or provide the right answers about seafood.

Aquaculture. Seafood “farming.” The breeding, rearing and harvesting of fish and seafood in all types of water environments including ponds, rivers, lakes and the ocean.

Bycatch. Marine life caught unintentionally. Even though specific species are targeted, other animals become hooked, trapped or caught in nets when attracted to the bait. There are restrictions on how much bycatch is allowed, and it is typically regulated.

Farm-Raised. Related to aquaculture, seafood is born and bred vast pens. The aim is to provide a fertile growing environment, such as in the cold fjords of the Faroe Islands or waters at the base of the Andes in South America. To maintain product health, farmed species are not allowed to mingle with wild species and the growing areas are rotated to protect quality.

Quota. A mandated limit usually controlled at a government level. It controls how much of a product can be fished by country, vessel, company or individual during a specific time period. Quotas are used to allocate fishing effort and control populations. Quotas may be transferable, inheritable and tradable. Quotas can affect the availability or price of fresh seafood products.

Wild Caught. Seafood captured in its natural environment. These fish and shellfish have a natural life cycle and feed on a natural marine diet, which is typically more diverse than what farmed fish get to eat on a regular basis.

Beach and Boat Seines. Seines are long nets that hang vertically in the water. Their bottom edges are held down by weights and their top edges are buoyed by floats, allowing them to be hauled over sandy or muddy bottom habitats to net fish. They can be used from the shore or from a boat.

Bottom Trawls. These cone-shaped nets are pulled along the sea floor by one or two boats to catch cod, halibut, lobster, rockfish, shrimp and other bottom-dwellers.

Gill Nets. In this fishing method, walls of stationary or drifting nets are suspended vertically in the water. The nets are virtually invisible to fish, so cod, perch, salmon, sardines, trout and other species swim right into them.

Hand Lines and Jigs. Manual or mechanical hand lines, used to catch species like tuna, snapper and grouper, can be single fishing lines or main lines with several branch lines. Hand lines may be outfitted with jigs—grappling hooks that mimic the movement of fish to lure in target species.

Long Lines. Long lines consist of a central line ranging from about a mile to 30 miles long, which is outfitted with a series of evenly spaced smaller lines bearing baited hooks. Drifting long lines are used near the water surface to catch open-ocean fish like tuna and swordfish, and set long lines are laid on or near the sea floor to catch cod, halibut and other bottom-dwellers.

Midwater Trawls. These cone-shaped nets, which can span the size of several football fields, are pulled along the midwater zone to catch such species as krill, rockfish and smelt.

Poles and Lines. This method uses a single line, hook and bait to catch one fish at a time. They can be hand-operated or mechanized.

Pots. Lobsters, crabs and Pacific cod are caught in these cages or baskets and kept alive until fishermen return for them. They’re usually placed on the sea floor but can also be used in midwater.

Purse Seines. A purse seine is a giant net that is used to encircle schooling or spawning fish, including sardines, squid and tuna. The nets are pulled at the bottom—like a drawstring purse—to herd fish into the center.

Trolling Lines. One or more fishing lines are drawn (or trolled) behind a boat to catch species such as albacore tuna, mahi-mahi and salmon. Lines may be hauled in mechanically or by hand.

Bottom Culture. This method involves growing mussels, oysters and scallops on seabeds and harvesting them by hand, rakes or dredging.

Off-Bottom Culture. This refers to growing shellfish in systems that are suspended above the seabed.

Net Pens. Mesh, net or wooden screens hold fish in open water as they grow. Net pens are used to farm species such as salmon and trout in ocean waters, and tilapia and trout in fresh waters.

Ponds. Ponds enclose catfish, shrimp, tilapia and other species in a coastal or inland body of fresh or saltwater. Farm ponds can vary greatly in size and sophistication.

Recirculating Tanks. Water flows continuously through these land-based tanks used to raise many finfish species, including Arctic char, striped bass and sturgeon. Wastewater is treated before it returns to the tank.

1x Frozen. Seafood that has been frozen one time. These products are usually frozen at sea, but also can be headed and gutted at sea and packed in ice to be frozen for the first time at a packing plant.

2x Frozen. Seafood that is frozen for the first time at sea or on shore, thawed at a processing plant and usually turned into steaks, portions or fillets and then frozen again for sale.

Dressed. Gutted and cleaned seafood. The dressed weight of fish is a measure taken after it has been cleaned and scaled.

FAS. An acronym for frozen at sea. Seafood is headed and gutted on the boat, then packaged and frozen.

Fresh vs. Refresh. Refresh is when an item is frozen after being caught and then thawed out for sale as a fresh application.

Glazing. Seafood is frozen in single units and is often glazed with water that acts as a naturally protective coating to prevent dehydration and freezer burn.

H&G. Short for headed and gutted or headless, dressed fish.

PBO/PBI. An acronym for pin bone out/in. The pin bones are a row of fine bones extending horizontally along the midline of a fillet, running from the nape of the fish for about one-third of its length.

STP. An acronym for sodium tripolyphosphate. It is an additive used to retain moisture in seafood and is typically used in twice-frozen items with specifications for moisture content.

Tasteless Smoke. This is a natural wood smoke that has had its smoky odor and flavor removed through filtration. Although carbon monoxide is a component of tasteless smoke, its concentration is similar to that found in normal wood smoke. It helps to retain the bright red color in fish like tuna, mahi-mahi, swordfish and tilapia. While considered safe, it must be declared on the label.